Disarming Design from Palestine raised over $8000 with their latest campaign. Here’s what they were able to accomplish 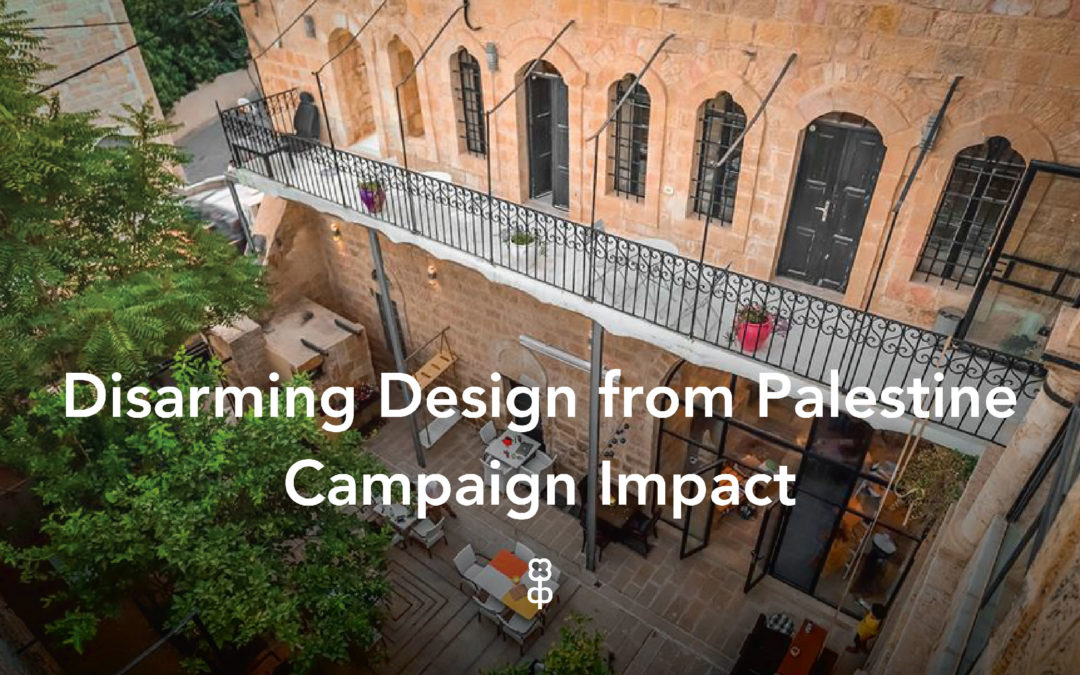 A year after running the crowdfunding campaign, The BuildPalestine team sat down with Raed Hammouri, executive director of Disarming Design for Palestine (DDFP) to discuss the outcomes of the campaign, and the impact it’s made.

DDFP launched the crowdfunding campaign to start the Alternative School of Design in Hosh Jalseh, Birzeit.

The crowdfunding campaign was very successful, and DDFP was able to mobilize support from across the world. Many the campaign’s supporters later visited the space, and were, according to Raed, amazed by what DDFP was able to create and achieve.

Raed says that the campaign has significantly aided DDFP in their activities, and has aided them with equipping the space more tools, and with renovating the space and opening the Design School officially.

Since the completion of the campaign, they’ve run four major workshops and trainings. They’ve also run courses on collective thinking and design, engagement with the community, science fiction, and oral archiving and memories. In addition, they are currently running more than seven courses on design, targeted towards softwares like Photoshop and Autocad for designers and architects.

According to Raed, demand for these courses and the school is very high, which is a very good indicator to people’s appetite and desire to learn.

It’s not just a school

A little over a year later, DDFP operates a social cafe, a gallery, a library, and a training room. The aesthetic setting, coupled by the activities DDFP offers, embrace and create community.

“We had customers who became friends, friends who became supporters, so our network grew significantly”

DDFP’s existing big network grew. The campaign also really helped the social enterprise be “on the map of designers around the world.” And it wasn’t only individuals who supported the campaign, but also design institutes who reached out to do a project with DDFP or to

exchange between designers from Palestine and Europe. The campaign thus, in a way, worked as a promotional tool for in the expansion of DDFP’s network.

“And the nicest thing is that we have new friends now, we didn’t go only to them to ask them for a favour but now some of the people from BuildPalestine are part of our projects and part of our lessons.”

“Fully committed to being a social enterprise”

When we asked Raed to talk about the challenges DDFP faces, he described two main challenges for the organization. The first, the financial challenge no stange to any non-profit. DDFP rely on donations or funding from local parties, as opposed to international donors. Currently, DDFP’s source of income comes from the profit coming from the sales of the products they offer. That profit is reinvested in the organization – making it a social enterprise in every definition of the word.

The second challenge DDFP faces is that of ‘reporting culture’ emphasized in the non-profit world, and which, in Raed’s opinion, is demotivating, and has driven many organizations out of the field. Raed says that although this is the case, DDFP still stands as a transparent and credible social enterprise in Palestine.

What advice does DDFP have for other social enterprises?

Raed, and DDFP,  learned that crowdfunding is not only about securing money, it’s also about creating long-lasting relationships with your community of supporters. “We are not only asking people for money and that’s it. We are asking them to become partners, we are looking for long term relationships.” You learn how better to communicate and talk about your work, and to network.

Moreover, Raed’s learnt that you have to be honest with your audience, and to do what you promised your supporters, and to plan accordingly. That’s the way to success in Raed’s opinion.

DDFP plan to continue to collaborate with other organizations in the ecosystem. The organization is considering cooperating with uMake Coworking Space in some activities  and possibly doing exchange of spaces and expertise. “We always say that this space is open for other initiatives to come and run their activities for free. We got so much from the community so we also need these initiatives to continue, we want to give back.”