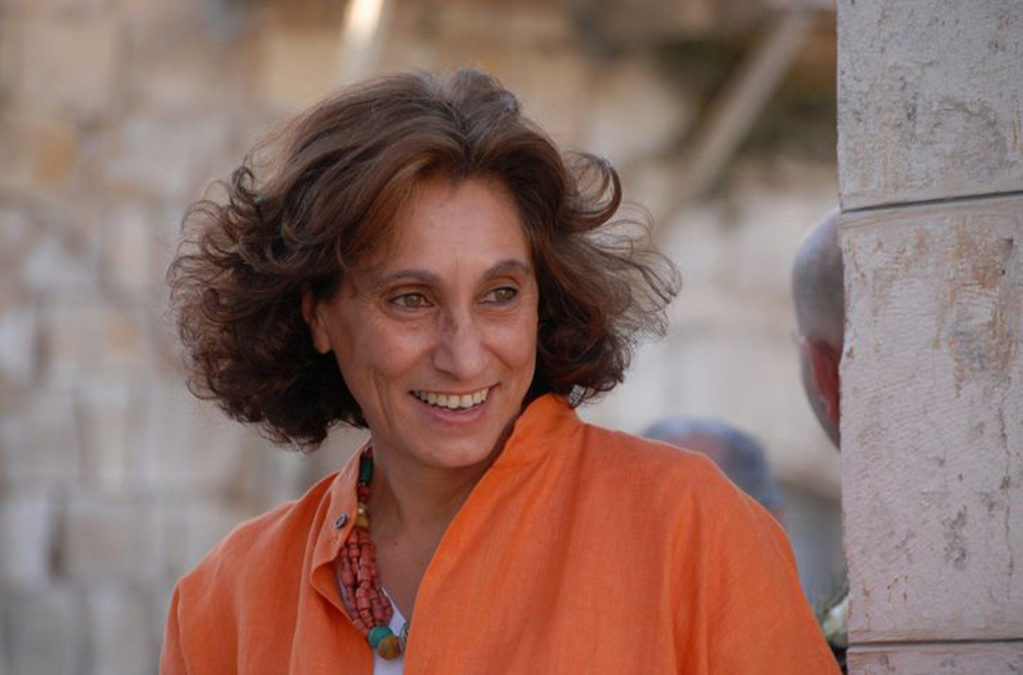 Drive through the Palestinian countryside and you’ll find houses caved in on themselves. Yellowed stones tumble onto the earth, flowers pushing through the crevices. Painted tiles have faded in vibrancy and iron clad windows have rusted a burnt orange. What were once homes now lie as memories.

In 1991, architect and scholar Suad Amiry set about changing this. She founded RIWAQ: The Center for Architectural Conservation, a non–profit organization dedicated to preserving and restoring Palestinian buildings. We’re here to illustrate a bit of what RIWAQ does, but perhaps, more importantly, we’re here to give you a glimpse into the woman behind the organization. We caught up with her and asked a few questions for a taste of her childhood and a few life lessons á la Suad Amiry.

Amiry got her start in architecture at a very young age. She had a keen interest in art and travel— knew exactly what she liked and exactly what she didn’t. Perhaps most importantly, Suad Amiry was is curious—about everything and everyone, particularly who we are and just why we end up the way we do. Don’t hold your breath, she never got an answer so I’m not much help there but I can tell you that she too fell mercy to the curious evolution of personal passion.

Amiry attributes these three main things in her life to the love of architecture:

1- Imagination for what she did not have: Amiry’s father is from Jaffa, and like most Palestinians hailing from this city, was never able to visit. Raised in Jordan, she quickly fostered an active imagination for everything in Jaffa she could never see herself. The hunger to know where half of her heritage had come from—the culture, the people, the architecture—was channeled into the creative reconstruction of Jaffa in her head. The striking absence of an entire city, half of her identity, gave her the imagination she would use later on in architecture.

2- Love for what she did have: Amiry’s mother is from Damascus. This side of the family had a beautiful courtyard house: The Jabri Palace. As a child, Amiry played in one of the most beautiful pieces of architecture in Damascus. Brilliantly colored floors, soaring ceilings, and intricately carved woodwork all crafted the environment she grew, played, and learned in. Art and beauty were all around Amiry and she drank it up, developing an eye for architecture early on.

3- A powerful role model: Aunt Hikma was an interior designer of one of Jordan’s palaces when Amiry was growing up. She was really Amiry’s mother’s friend but it was only appropriate to call her khalto, as Middle Eastern culture dictates. But calling her Aunt Hikma is more than a respectful tradition of Arab culture; it signals the intimate admiration Amiry had for her. This woman was perhaps everything a young girl like Amiry could hope to be: intelligent, artistic, and elegant. Amiry was fascinated by Aunt Hikma’s world of design and so her love of architecture was secured.

Below, Amiry’s thoughts on a few aspects of life:

How Riwaq came about is something of the stuff of incident—“incident” being the purely unplanned culmination of observation, passion, and will. Amiry had all of these things under her belt when she decided that, as a Palestinian, it was time to finally visit Palestine.

She got her permit and arrived for the first time in 1981. Amiry informed me that 1981 Palestine looks dramatically different from 1996 Palestine and even more so than 2017 Palestine. I can only imagine the charming villages and landscapes Amiry described to me. It’s easy to see why she immediately fell in love and did her Ph.D. on Palestinian village architecture.

But Amiry didn’t stop at PhD—she wrote a book on the subject. Even then she still wasn’t satisfied. It seemed that no one cared about the old homes of Palestine and so she decided to do something about it: Enter Riwaq—the offspring of the aforementioned observation, passion, and will (see *ON MOTIVATION).

After losing 420 Palestinian villages circa 1948, Riwaq set about preserving the remaining 420 villages (Amiry personally recommends reading All That Remains for context). What the team considers the pride and crowning achievement of Riwaq is the National Register of Historic Buildings, which now features exactly 50,320 buildings. Read that number one more time.

When Riwaq started in 1991, Amiry and team weren’t exactly sure what they were doing, what the vision was, or where they would even end up (read leap of faith). They did know, however, that a database needed to be created to understand exactly what remains of the 420 villages we have today. So, they recorded everything—every structure, every floor, ceiling, window, and archway and set about renovating them to bring families back in.

Riwaq’s success in preservation/restoration/renovation is more than the sum of its registered structures—not to say that it isn’t impressive because, with over 50,320 registered and documented historic structures, it most definitely is. But the numbers aside, the register has meaning. Every structure is a testament to the saving grace of our own heritage. The register is a defiant grip on the value of the past. It is bold and essential. It is saying “we are here.”

Riwaq’s success may also lie within the team itself. The institution holds both a point of view and vision and the employees all share that vision and defend that point of view. It certainly isn’t easy to start an organization, sustain it, and make everyone who works in it feel that it is their organization too. To create something for the world and to foster a community who believes in it too is a success in and of itself. For this reason, Riwaq is alive and thriving 26 years later.

Amiry studied architecture in the 70’s, the era of modern high-rise architecture. The aesthetic was minimalist, sleek, and refined—and Amiry couldn’t care less for it. In fact, she was horrified by it. Her visit to Moscow was just one example of this. Exploring the city, its wide avenues, and its high buildings, Amiry couldn’t help but see the inhumanity of it all. They simply didn’t speak to her.

One of her earliest conversations with architecture took place when she visited Italy for the first time. The little villages and the old parts of the cities all spoke to her. This was vernacular architecture, natural architecture, “architecture without an architect.” Amiry fell in love and so she formed an aesthetic for the organic, the natural, and the simple.

ON FOLLOWING THE RULES

In the world of architecture, there are rules set in place to ensure that historic structures are preserved for the sake of history. Amiry doesn’t exactly see it this way. Instead, she sees the historic structures of Palestine as homes and treats them as such. Her job is to take these forgotten structures and restore them into homes for families. When she needs to knock down a wall, she knocks it down. When a window is too small, she tears it out to make a bigger one, even if tradition calls for smaller windows. She tells me that at Riwaq, “we are more faithful to life than to the stone itself.” So, in the case of bringing life back to a place, the rules can be broken.

One rule that Amiry does follow is a building regulation that Palestinians did away with in 1996. Before that year, the rule was that buildings could not be built higher than 4 floors. The result was a charming series of towns and villages organically nestled into the landscapes and terraces of Palestine. After ’96, cities were spoiled with poorly planned high-rise buildings. Over 90% of Palestinian architecture has been built since that year and the result is a far less organic way of life. Here, Amiry believes the rules of the past were ones well worth following.

Historic buildings are built on less than 0.5% of the land in Palestine. While it doesn’t sound like much in size, it’s worth countless times more in heritage and culture. In a way, Amiry is setting a sort-of deal with us: Preserve this 0.5% and leave the other 99.5% to be modernized as you wish.

Think of architecture as a language. The style, the age, and the function all serve to send a particular message to the rest of the world. When we let our own civilization and culture fall to ruin, we are helping to say that Palestine never existed. Amiry works to show that you don’t need to demolish the past to say that you exist now and today.

Amiry believes in the interconnectivity of things. Nothing that happens in life is isolated from anything else—both the beautiful and the tragic. The thread tying it all together? Equality. Or at least, the goal of equality. According to Amiry, when you aspire to reach a state of human equality, you find that every problem is inherently related to another. So, gender equality is related to economic equality which is related to environmental equality and so on and so forth. In other words, you’re not alone in your fight.

Amiry recalls one project in particular in which the entire village community came together to aid the rehabilitation of one home. In her mind, this project stands out as one of the most successful. She tells me that “the hope lies in the people. True progress comes about when we come together like this”.

Yasmeen Mjalli is a freelance writer and artist based in Ramallah. A graduate of art history from the University of North Carolina Greensboro, she seeks to foster collective cultural experiences and movements through writing and socially engaged art projects. She can be reached at [email protected] or on Linkedin.