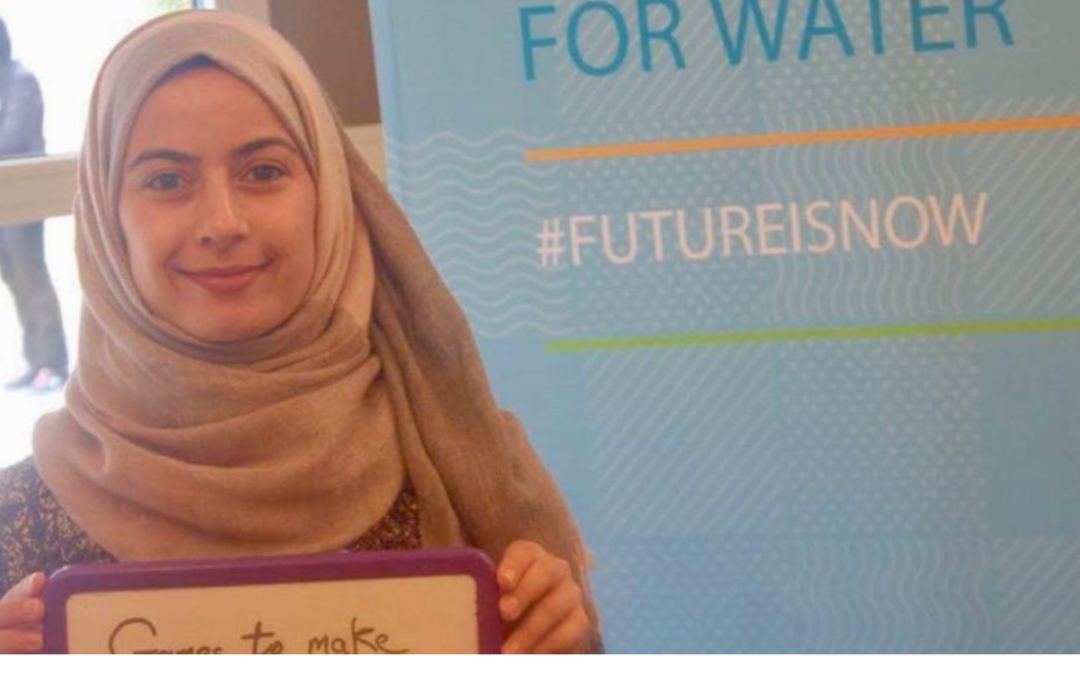 Since the signing of the Interim Agreement in 1995, Palestinian dependence on Israel for purchase of natural resources such as water and gas has only increased, old water-wells continue to dry up as Israel denies permits for new ones, and most solid waste is either dumped on random sites or burned. And while the Israeli occupation facilitates relentless expropriation of land and resources from the West Bank, the Palestinian Authority, despite its best efforts, still often mismanages the limited amount of control it does maintain over Palestine’s resources and environmental-management systems. The water and sanitation sectors need work, to say the least.

CEWAS, a Swiss non-profit association that trains entrepreneurs in sustainable water and sanitation practices, has its work cut out for it in Palestine. Lillian Volat, founder and project leader of CEWAS Middle East, and a host of young Palestinian entrepreneurs believe they can fix the dysfunctional environmental sectors—and invigorate them through the private sector. “The current donor-based approach in water and sanitation has not proven sustainable in terms of providing services and fixing environmental problems,” Lillian told me over Skype from her office in Beirut, where she is jump-starting a similar entrepreneurial training-program in Lebanon. She worked for two years in the water and sanitation sectors in Palestine. “Projects are not always implemented on an as-needed basis, but because of a donor’s timeline, which generates a culture of short-term thinking and doing. I became frustrated; I wanted to solve the sanitation crisis through a different angle, to support entrepreneurs and existing institutions innovate sustainable, profit-driven solutions to environmental problems.”

Lillian founded CEWAS Middle East in late 2013. Every year she finds ten promising environmental start-ups and puts them through a series of training and mentoring sessions designed to help the entrepreneurs develop strong business models and market their companies to local and international investors CEWAS connects them with. The winner of a competition held at the beginning of the training program takes home money to help his/her start-up get off the ground, and to cap it all off Lillian hopes to create a dedicated green investment fund the start-ups can access when other sources of capital fall short.

But in the context of the occupation, many Palestinians feel they have problems larger than the environment to worry about, life and livelihood not the least among them. Lillian understands. “For the most part, a sustainable sanitation movement is a low priority in Palestine right now,” she acknowledged. “But hopefully linking sustainability to financial return will change that.”

Founded by Bethlehem natives Basel Jarayseh and Nicola AbuAmsha, the Citizens of the World recycle plastic, and transform the waste into an array of political- and religious-themed souvenirs they sell at the myriad souvenir shops operating out of Bethlehem. Attached to the souvenirs are notes about the social- and environmental- impact of their work—not only do the Citizens of the World decrease the amount of plastic waste in Palestine, but they also design their machines to be operated by disabled persons in the hopes of reducing their unemployment levels and re-distributing wealth.

The project began as a research paper at Birzeit University. Basel, who majored in public administration, and Nicola, a civil engineer, were concerned with the absence of recycling infrastructure in Palestine. So in 2016, following the blueprint of engineer and environmentalist Dave Hakkens, they decided to build their own plastic recycling machine. Equipped with both a shredder and an oven, the machine has the capacity to produce 1,600 plastic souvenirs per month, and costs less than $1,000 to build.

The only problem now is, ironically, the trash. Without municipal-wide recycling programs and a lack of political will, most Palestinians throw their plastic out. Because the government owns that waste and won’t separate it out, the Citizens of the World have no legal right to take that plastic, and are essentially left to build a whole recycling industry on their own. They’ve been collecting the plastic where they can. While the YMCA has said they will purchase 11 machines for their 11 facilities across the West Bank if the pilot project succeeds, the Citizens of the World hope to eventually make deals with larger companies such as the Bank of Palestine, GIZ, and Save the Children. They will also soon start lobbying the Bethlehem school system and universities to provide recycling bins on their campuses, and begin hanging posters to educate and encourage recycling habits. They’re starting off small—but the hope is to engender a nation-wide recycling initiative.

Water Heroes is an educational computer game designed to teach young Palestinian students about the water cycle and the principles of water conservation. The children accumulate points as they answer questions correctly and learn how to conserve the virtual water in daily contexts. It’s a flashy game. Lamis Qdemat, who graduated from Al-Quds University with a master’s in the environment and water studies in 2016, designed it so that, above all else, the students learn as they’re having fun.

The Hebron-based entrepreneur realized that Palestinian children were not receiving proper environmental education while she was an intern with the Environmental Quality Authority. Although the agency gives presentations on environmental protection issues to school children, current pedagogic approaches have thus far not widely succeeded in helping the children attain their national education targets.

That, and her realization that Palestine couldn’t wait for the occupation to end to begin to alleviate its water crisis, pushed her to create the computer game. Although she believes water-conservation habits are important no matter what the context, surely the political situation in Palestine necessitates more urgency. Even as the population continues to grow, they still only have access to some 75% of the 200 million cubic meters (mcm) of yearly water that the Oslo Accords granted as a right by the year 2,000, and average consumer water consumption falls far short of the daily minimums recommended by the World Health Organization.

Lamis has been developing a prototype of the game now for one year, but she still needs $20,000 in funding to finalize and implement it; a small cost for a game she hopes will be utilized across the entire Palestinian school system.

Anton Hallak, a chemical engineer from Jerusalem, aims to safely recycle electronic waste—its precious metals, its plastics, its every component—and in the process help solve a dire public health crisis in Palestine. Outside of Hebron, a scattering of villages relies almost solely on Israeli electronic waste for their livelihoods, processing tens of thousands of tons of it every year. The miners buy the waste, extract the precious metals, and then sell those metals back to Israel, in the process burning the plastics and discarding the remains throughout 500 informal sites around the area.

The environmental and public health blowback is astounding. Toxic compounds and heavy metals have poisoned the soil around the sites, and water that flows from the contaminated hillsides kills the vegetation beneath. Furthermore, preliminary studies have shown lead levels in children who live near and work within the e-waste industry to be dangerously high, and Professor Yaakov Garb, an environmental scientist at Ben-Gurion University who has studied the trade and contributed to solving its dangers for years, has found that a certain type of cancer may also be more common in the villages.

Anton Hallak, 27, hopes that by providing a safe and alternative industrial-scale outfit to process the e-waste he can decrease the amount of pollution in Palestine without destroying an economy that, at the moment, provides a steady stream of income to hundreds of families. Before the factory can begin to run, however, he first needs to obtain the EUR 500,000 necessary to purchase the two recycling machines for his Bethlehem-based factory. With the process in full swing, he’ll send the recycled waste to a range of companies and refineries around Europe—what he hopes will be the beginning of a circular and sustainable e-waste economy that can serve as a model not just for Palestine, but also other developing countries where e-waste gets dangerously and unceremoniously dumped.

Ghadeer Arafeh, a water and environmental researcher at Birzeit University, was a young girl when her uncle founded the first biodiesel factory in Palestine. For various reasons, it didn’t succeed, but Ghadeer didn’t let go of the idea. Now, at 31 years old, with a bachelor’s degree in environmental physics and a master’s in environmental science, she believes it’s more important than ever to bring biodiesel to the Palestinian market. Of course, when she talks about the issue it’s hard to disagree.

At the moment, Palestine is almost completely energy dependent on Israel. Since the beginning of the occupation, Israel has granted the Israel Electric Corporation (IEC) ownership of 95% of the electrical grid in the West Bank, while at the same time systematically prevented Palestinians from developing their oil and gas reserves. A huge problem, indeed; yet barring the sudden illegality of vegetable oil, Palestinians use tons of gallons of the stuff to cook every year. Ghadeer wants to harvest 100,000 liters of it per month from the hotels and restaurants across the West Bank, which she can then turn into fuel to be sold at 1/3 of the price Palestinians buy gas for now, and thereby begin to wean energy needs off of Israel.

Moreover, biodiesel is far cleaner than petroleum diesel; a 1998 biodiesel life cycle study concluded that the burning of biodiesel reduces net CO2 emissions by 78% in comparison to petroleum diesel. To sum all of that up, if Ghadeer can find the $500,000 she needs to import the latest refinery equipment, and convince potential partners and buyers within the local market of the value of her yet unfamiliar product, she would be battling climate change, energy dependence, and the wasteful habits that come with throwing out organic waste all at the same time.

The Green Shop, the Green Building Council, and the Cafeteria at the Palestinian Museum—Wijdan Al-Sharif

Wijdan Al-Sharif is out to change Palestine’s consumption habits, and she’s doing it by way of her new company, the Green Shop, where she markets organic product and healthy life-styles for her followers. One post might raise awareness about the dangers of processed white flour and its relationship to diabetes, another might market a book on health, while yet another an organic cleaning agent or beauty product her followers can buy directly from her website. She’s frustrated by what she perceives as a lack of general health information available to Palestinians and throughout the larger Arab world. As someone with pre-diabetes herself, Wijdan is concerned with making sure other Palestinians at least know how to choose to live healthier lives.

And she’s not just selling others’ products, either. Recently, she founded an organic, low-carb, gluten- and sugar-free cafeteria in the Palestinian Museum of Birzeit, which she hopes will serve as a healthy alternative for those who want to eat out but want to abstain from Palestine’s heavy, carbohydrate-based diet. Anyone visiting the museum can come and sit down for tea and coffee, but a healthy, full-course meal requires a reservation so Wijdan can prepare it as requested. The fact that her cafeteria is in Palestine’s first LEED-certified building (its construction supervised by the Palestine Green Building Council of which she, trained as a civil engineer, is also a co-founder) is only fitting.